A couple of months ago, Microsoft announced their plans for Azure and containers where they would provide you with a first class citizen resource provider in Azure so that you could build, run and manage scalable clusters of hosts machines onto which containerized applications would be running.

What you also probably have noticed is that Microsoft is having an open approach to container management. In fact, the container service is currently based and pre-configured with Docker and Apache Mesos, so any tools you would prefer for management “should just work”.
This is a new game for me to play so I am learning a lot. J

In the meantime, I am also working a lot with Windows Server Containers in Windows Server Technical Preview 4 – which is an image that is available in the Azure gallery.
However, I wanted to extend the experience a bit and decided to create my own ARM template that will ‘mimic’ some of the functionality in the Azure Container Resource Provider, to actually instantiate a new container running IIS Web-Server and be available for requests.

The template will deploy:

·         A Vnet
·         Network interface
·         Public IP address with DNS (the DNS will be based on the hostname.region.cloudapp.azure.com and provided as output once the deployment has completed)
·         Storage account
·         Network Security Group to allow RDP to the host – as well as http
·         Virtual machine (based on the TP4 image)
o   Custom Extension that will:
§  Spin up a new Windows Server Container based on the existing image (server core)
§  Install Web-Server within the newly created container
§  Stop the container – and create a new container image
§  Deploy a new container based on the newly created container image
§  Create a static NAT rule and a firewall rule to allow traffic on port 80 to the container from the host

This is a working experiment and I am planning to extend the template with more applicable tasks as we move forward.

The template can be explored and deployed from this GitHub repo: 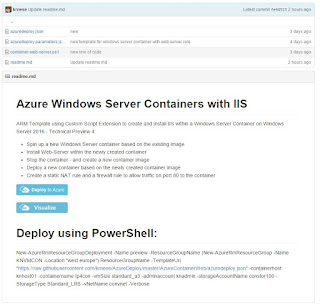 Posted by Kristian Nese at 11:24 AM No comments:

Getting started with Containers in Azure

Recently, I had a presentation/workshop in Norway at a Docker conference (http://www.code-conf.com/day-of-docker-osl15/program/#knese ) 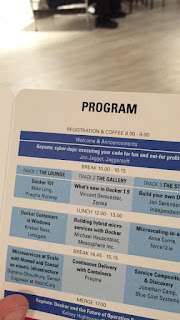 This was quite a new audience for me and it was great to be the person who showed them what Microsoft is doing in the era of container technologies, using both Microsoft Azure and Windows Server 2016 Technical Preview 4.
One of the key things to point out is that containers are “just” a part of the big picture that we are seeing in these days.
The following graphic shows where we are coming from – and also where we’re heading. 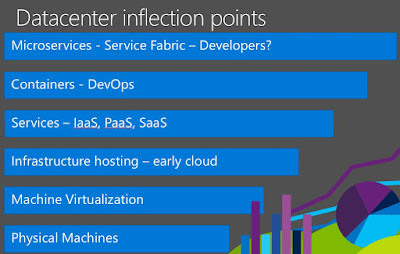 Starting at the bottom, the early generation in this industry used to have a lot of physical machines to run their business. We all know that having workloads and applications on physical machines is not where we want to be today, because that is not flexible, scalable and for sure want do any good for our demand for utilization.

Above physical machines we can find machine virtualization. This should all be quite common now and we have been very good at virtualizing servers for quite some time. In fact, we are now not only virtualizing servers – but also the other infra components too, such as networks and storage.
Machine virtualization in this context is showing us that we are abstracting the compute resources from the underlying physical machine – which introduces us to the first stepping stones towards flexibility, scalability and increase the utilization.

Further, we have infrastructure hosting which can be seen as the early days of cloud, although the exact service model here is not defined. This means that “someone” would do the investment and ensure the required amount of capacity for you as a customer, and you can have your workloads and applications hosted in the hosting datacenter. This was machine virtualization at scale.

The next step is the more familiar service models we can consume from a cloud, such as Infrastructure as a Service, Platform as a Service and Software as a Service. Although these service models are different, they share the same set of attributes such as elasticity, self-servicing, broad network access, chargeback/usage and resource pooling. Especially elasticity and resource pooling is a way to describe the level of flexibility, scalability and utilization we can achieve. I expect you as the reader to be quite comfortable with cloud computing in general, so I won’t dive deeper into the definition at this point.

Next, we are now facing an era where containers are lit up – regardless whether you are a developer or IT-pro. Containers builds on many of the same principals as machine virtualization, where abstraction is key. A container can easily be lifted – and shifted to other deployment environments without having the same cost, luggage and complexity as a virtual machine – as a comparison.

In the Microsoft world we have two different runtimes for containers.
Windows Server Containers that are sharing the kernel with the container host which is ideal for scalability, performance and resource utilization.
Hyper-V Containers gives you the exact same experience, only that the kernel in this case isn’t shared among the containers. This is something you need to specify during deployment time. Hyper-V Containers will give you the level of isolation you require and is ideal when the containers aren’t trusting each other nor the container host.
Microsoft has also announced that they will come with their own Azure Container Service in the future, as a first-class citizen resource provider managed by ARM.

Last but not least, we have something called “microservices” on the top in this graphic. In the context of Microsoft we are talking about Service Fabric – which is currently a preview feature in Microsoft Azure today.
Service Fabric is a distributed system platform where you can build scalable, reliable and easily managed applications for the cloud. This is where we are really seeing that the redundancy, high-availability, resiliency and flexibility isn’t built into the infrastructure – but handled at the application level instead.
Service Fabric represents the next-generation middleware platform for building and managing these enterprise class, tier-1 cloud scale services.

From a Microsoft Azure standpoint it is also important that you know that “VM Scale Sets” (http://kristiannese.blogspot.no/2015/11/getting-started-with-vm-scale-sets-with.html ) is the IaaS that enables these PaaS services (Azure Container Service + Service Fabric).
Also, as part of Windows Server 2016 Technical Preview 4, we will be able to leverage Nano Server for containers too, so you can get the optimal experience for your born-in-the-cloud applications.

So, that was me trying to put things into context and why I spent some time that day to have a workshop on Containers using Azure.

Getting started with Containers in Microsoft Azure

The material I used for this workshop can be found in this public GitHub repo: https://github.com/krnese/AzureDeploy/tree/master/AzureContainer 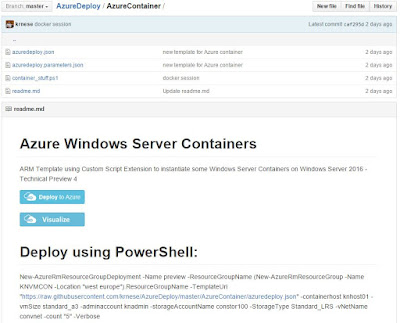 I created an ARM template that will: 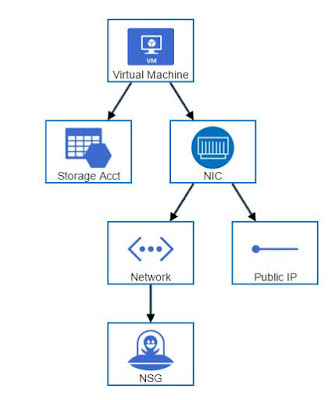 If you deploy this from GitHub and follow the ps1 examples you should be able to simulate the life-cycle of containers in Windows Server 2016 TP4.

Posted by Kristian Nese at 8:07 AM No comments: