Together with Savision, I am glad to announce that a new whitepaper has been published.

The content is focusing on the Cloud OS – and especially the private cloud enabled by Windows Azure Pack.

If you find this interesting, I suggest that you download it and sign up for one of our free webinars in the near future. 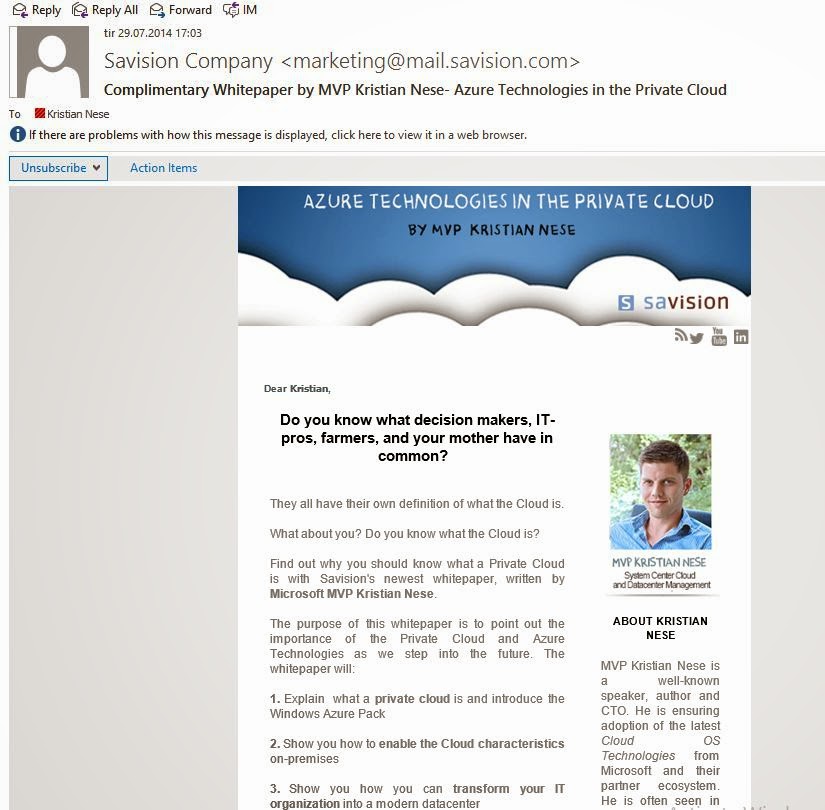 Posted by Kristian Nese at 5:15 PM No comments:

Solving classification for your VM Roles with VMM

Since you are reading this blog post, and hopefully this blog now and then, you are most likely familiar with the concept of Gallery Items in Windows Azure Pack.

If not, I suggest that you read the following resources: http://kristiannese.blogspot.no/2013/10/windows-azure-gallery-items-getting.html

If you want all the details around everything, please download our “Hybrid Cloud with NVGRE (Cloud OS)” whitepaper that put everything into context.
http://gallery.technet.microsoft.com/Hybrid-Cloud-with-NVGRE-aa6e1e9a

My good friend and fellow MVP – Marc van Eijk, will publish a couple of blog posts at “Bulding Clouds blog”, where he dive into the nasty details around VM Roles. Here’s the link to his first contribution: http://blogs.technet.com/b/privatecloud/archive/2014/07/17/the-windows-azure-pack-vm-role-introduction.aspx

Before we proceed. Gallery Items brings “VM Roles” into Azure Pack, which reminds you a lot of service templates in VMM in the way that they are able to climb up the stack and embrace applications and services during the deployment. However, a VM Role is not completely similar to a service template in VMM as it has no knowledge of any of the profiles (Hardware Profile, Application Profile, SQL Profile and Guest OS Profile).

This is where it gets tricky.

Gallery Items are designed for Azure and brings consistency to the Cloud OS vision, by letting you create VM Roles through the VMRoleAuthoringTool from Codeplex for both Azure Pack (Private Cloud) and Microsoft Azure (Public Cloud).

The components of a VM Role are:

The tool let you create, alter and update all these components and you can read more about the news on this blog post: http://blogs.technet.com/b/scvmm/archive/2014/04/22/update-now-available-for-the-virtual-machine-role-authoring-tool.aspx

So far, in 2014, I have been visiting many customers who are trying to adopt Azure Pack and Gallery Items with VM Roles. They want to provide their tenants with brilliant solutions, that are easy to understand and deploy, and can be serviced easily by the cloud administrators.
However, there are some important things to note prior to embracing the VM Roles in Azure Pack, especially when it comes to storage.

Why are we using Differential disks for VM Roles?

This is a frequently asked question. In the VMM world, we are familiar with the BITS operation during VM deployment. Luckily, fast file copy was introduced with VMM 2012 R2 and we can also leverage ODX for deployment now, so hopefully BITS is nothing that you see very often when deploying VMs anymore.
However, in order to speed things up a bit more, we are using Diff disks for VM Roles. This is because we intend to reduce deployment time and improve performance. Shared bits from the parent VHDX would be served up from cache in most scenarios and new VMs simply create a new diff disk and boot up. This goes for both OS disk and data disks for the VM Role. No file copy need to occur (except for the first VM to require the disk). When you then decide to scale a VM Role in Azure Pack (scale out), the new instance can boot almost immediately and start walking through the setup.

Ok, I understand the decision around Differential disks now, but what about storage classification and where to put these disks?

Since VM Roles in Azure Pack are only linked to the disks in the VMM library (by using tags), we can’t map it towards any of the storage classifications.
Out of the box, there is no way to modify this prior to the deployment.

In VMM, navigate to Fabric and click on properties on your hosts in the host groups associated with the cloud used by Hosting Plans in Azure Pack. 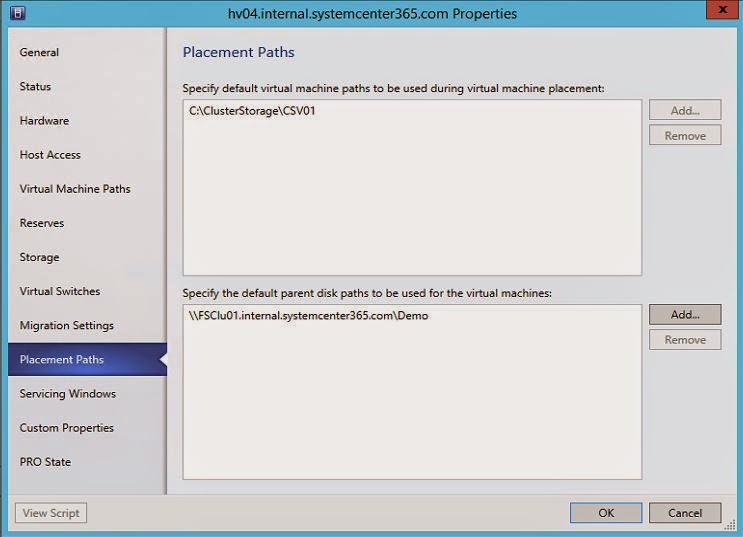 Here you can specify the default parent disk paths to be used for the virtual machines (VM Roles).
If you have dedicated shares or CSVs, this might be helpful and can streamline where the VM roles are living.

At a customer site earlier this year, we ended up by using Powershell to move the disks around after deployment.

This is something we added to SMA afterwards that was automatically triggered post the create operation of every new VM Role.

As you can see, we are querying virtual machines that has an availability set associated. Each and every time you deploy a VM Role with Azure Pack, the underlying cloud resource in VMM gets an availability set to ensure that when you scale out the VM Role, the workloads are spread on different Hyper-V nodes in a Cluster (assuming you are using a Hyper-V Cluster for your workloads).

That’s it, and hopefully this gave you some ideas and more information around VM Roles in Azure Pack.

Posted by Kristian Nese at 7:51 PM No comments:

I received a question this morning if it was possible to create many VMs at once using the tenant public API for Azure Pack.

The short answer is: yes.

If you want to know how to expose and configure the tenant public API in Azure Pack, then you can read a blog post, I wrote a couple of weeks ago: http://kristiannese.blogspot.no/2014/06/azure-pack-working-with-tenant-public.html

Here’s the cmdlets for creating 5 virtual machines as a tenant, using the tenant public API in Azure Pack with PowerShell ISE:

### Import the PublishSettingsFile you have downloaded from the tenant portal

### Get your VM Template and store it in a variable

### Get your Virtual Network and store it in a variable

### Define an array. We will create 5 VMs in this example

Once the cmdlet has completed, you should have 5 virtual machines in the tenant portal, like wapvm1, wapvm2, wapvm3 and so on. 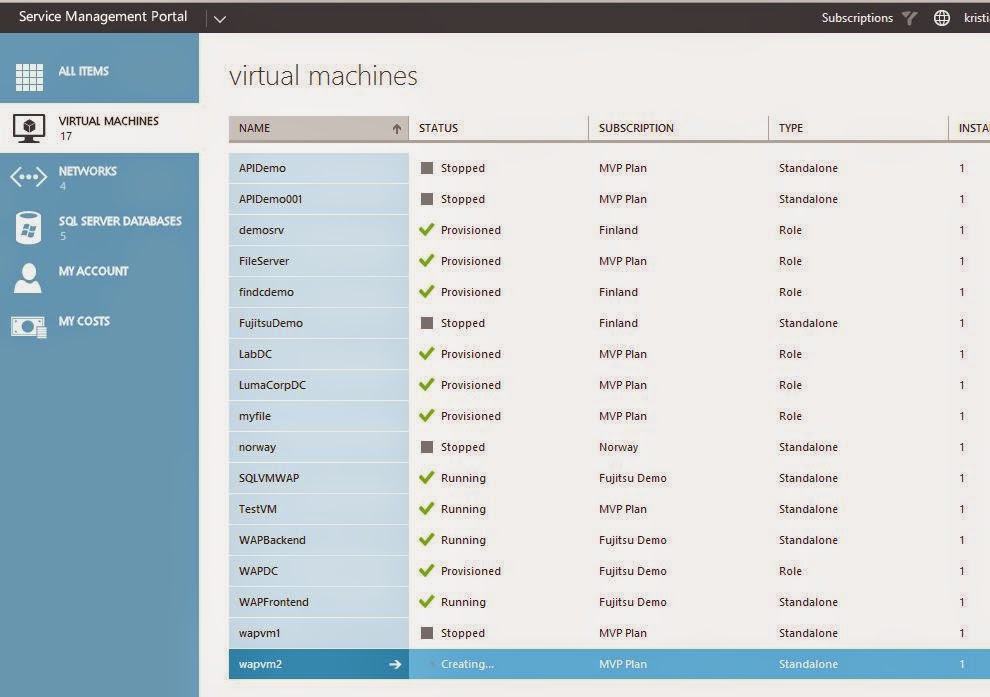 Posted by Kristian Nese at 2:17 PM No comments:

If you are interested in Azure Pack and especially the VM Clouds offering (Infrastructure as a Service), then you should mark the date and time so that you are able to join us this week.

We will be arranging a MVA Jump-Start: Windows Azure Pack – Infrastructure as a Service Jump-Start.

“IT Pros, you know that enterprises desire the flexibility and affordability of the cloud, and service providers want the ability to support more enterprise customers. Join us for an exploration of Windows Azure Pack's (WAP's) infrastructure services (IaaS), which bring Microsoft Azure technologies to your data center (on your hardware) and build on the power of Windows Server and System Center to deliver an enterprise-class, cost-effective solution for self-service, multitenant cloud infrastructure and application services.

Join Microsoft’s leading experts as they focus on the infrastructure services from WAP, including self-service and automation of virtual machine roles, virtual networking, clouds, plans, and more. See helpful demos, and hear examples that will help speed up your journey to the cloud. Bring your questions for the live Q&A!”

To get a solid background and learn more on what we are going to cover, I highly recommend to download and read the whitepaper we created on the subject earlier this year.

Together with some of the industry experts, I will be answering questions during the event – so please use this opportunity to embrace and adopt the Azure Pack.

Posted by Kristian Nese at 12:03 PM No comments:

Recently, I wrote a blog post where I explained the setup of Azure Site Recovery so that you could use Microsoft Azure as your DR site. Here's a link to the blog post: http://kristiannese.blogspot.no/2014/06/microsoft-azure-site-recovery.html

One week after, I had a webinar on the subject and you can now watch it on demand following this link:

Hopefully you will find it useful, and there is still a lot to cover to explore all the goodies in this solution. If you have specific things you would like to see on this blog, please leave a comment.

Posted by Kristian Nese at 4:55 PM No comments: