Getting started with VM Scale Sets with Azure Resource Manager

Recently, Microsoft announced the public preview of ‘VM Scale Sets’ which is a new Azure Compute resource (Microsoft.Compute/virtualMachineScaleSets) that lets customers deploy and manage a set of virtual machines that are identical.

Yes, but at the same time, this is new. Let me explain why.

Azure Compute, Network and Storage serves as the backend for many familiar Azure Services that we are using already today, such as Web Apps, Batch, Azure Automation and much more.

You have probably also heard about the newly announced public preview of Service Fabric – which is the ideal platform for microservices and containerized workloads to ensure business continuity and reliable applications, completely changing the way customers can develop applications at hyper-scale.
But did you know that the Service Fabric is also a service that runs on top of a virtual machine, requires network connectivity using a “normal” network in Azure and also can use some of the storage features in the backend?

That is also where the VM Scale Sets can come into play, serving as the perfect foundation for those kind of services and applications you want to build.
VM Scale Sets are designed to support autoscale and doesn’t require any pre-provisioning of the virtual machines.

Network and storage features are of course incorporated as you would expect, so that you can easily leverage VM Scale Sets as a first class citizen in Azure, following the Resource Group structure you prefer.

I encourage you to take a closer look at VM Scale Sets, which is a new resource type within the Microsoft.Compute namespace for the CRP.

I have already created an Azure Resource Manager template that let you deploy VM Scale Sets – using DSC VM Extension to configure Web-Server (IIS), as well as deploying a virtual machine you can use for management.
There’s also additional details such as load balancing, network security groups and more that you can explore. 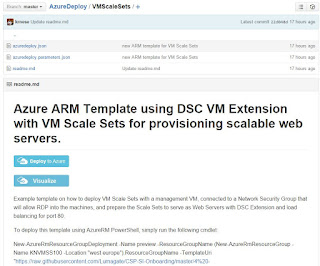 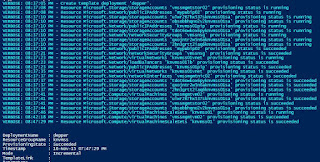 Have fun – and happy scaling!

Posted by Kristian Nese at 12:36 PM No comments: