Are you a Microsoft Partner and want to dig into the great new contents that ships with System Center 2012?

Then you should sign up for the System Center Boot Camp in Tønsberg (Norway) at http://blogs.technet.com/b/partnerbloggen/archive/2012/03/01/er-du-klar-for-fremtiden-bli-med-p-229-lanseringsbootcamp-p-229-system-center-2012.aspx

I`ll have quite a few sessions during the boot camp where I`ll be touching Data Protection Manager, App Controller and...behold... Virtual Machine Manager.
At least, that`s my agenda, but I`ll also show the components in the context of a private cloud that also includes Orchestrator, Operations Manager and Service Manager - it`s all a part of my demo environment, so I can give the audience the demos they need and expect, and a true understanding of how to increase the value they`re already giving to their customers and clients.

By the way, I`m also counting the days for next week where I`ll talk about Windows Server 2012 and Hyper-V 3.0 for hosters as well as SC 2012 during the "Hosting Day" at Microsoft HQ at Lysaker.

Alright, I have some slides to polish.
Posted by Kristian Nese at 9:05 PM No comments:

It`s not new that Microsoft have made some significant improvements in the private cloud fabric recently, where you can integrate WSUS with System Center 2012 – Virtual Machine Manager, so you can on-demand update your Hyper-V hosts and Hyper-V Clusters, in an automated fashion.


VMM will place the hosts (one at a time) in maintenance mode, live migrate the VMs to the other nodes, patch the node, eventually reboot the node and take it out of maintenance mode before it goes on with the next host.


So, this is brilliant. I can`t tell how many times I`ve done this manually prior to VMM 2012, when I rather should be home watching some random Barcelona match on TV.


Let`s take a look at the easy configuration for Cluster-Aware updates.


1.       Connect to your cluster that you want to enable for Cluster-aware updating. In my case, I have a cluster that hosts my highly available VMs, connected to a Windows Server 2012 iSCSI target. 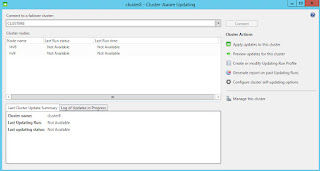 3.       You`ll be able to add the CAU clustered role if this is not already added on the server. Click next 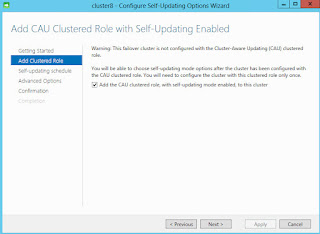 4.       Configure the frequency of self-updating. I`m leaving it with the defaults in this case 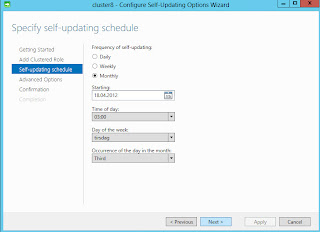 5.       During the page for advanced options, you can use the settings based on a configuration you have created elsewhere (xml file) if you want the same options to be applied across your clusters, or specify new parameters in this view. I have enabled the ‘RequireAllNodesOnline’ and ‘MaxFailedNodes’ in this example 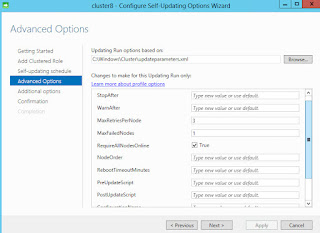 6.       Additional options lets you get recommended updates the same way that you receive important updates through Windows Update 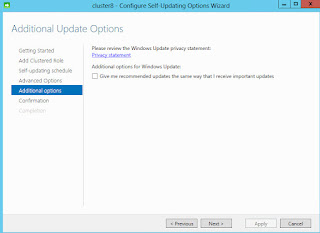 7.       Confirm your choices, and if you scroll down you`ll see the PowerShell code workflow that will take place during completion. 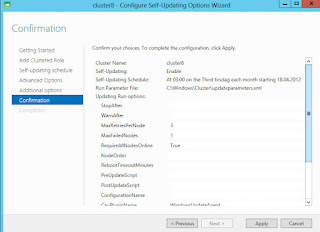 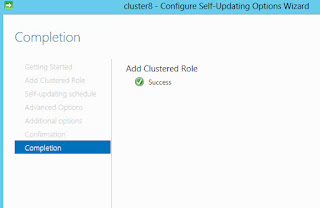 Posted by Kristian Nese at 8:59 AM No comments:

I`ve created a tiny white paper that explains cloud computing in general and the value that System Center 2012 brings to the table.
Based on research and work I`ve done over the last year, there is a huge need of knowledge and understanding of the subject. And it`s very important to know what cloud is, and how Microsoft offer cloud computing through System Center 2012 prior to the deployment.

Hopefully, this document will provide you with an overview and introduction, targeting both the CIO and the IT-pro.

Cheers,
Posted by Kristian Nese at 8:48 AM 3 comments:

I have just received a HP Proliant Microserver for my lab.


This tiny little sexy thing is about to leverage some cool features in Windows Server “8”.


I have installed Windows Server “8” Beta and played around with storage pools and storage spaces.I have also tested the built-in iSCSI target in Windows Server “8”, which is currently hosting my Hyper-V 2008 R2 clustered VMs.


The Microserver has currently only 1 NIC, which should give you a hint that it`s possible to simulate the foundation of a private cloud using budget hardware.


As I stated in my previously post, I will have 2 clusters. One 2008 R2 running System Center 2012 workloads for POC, and one Windows Server “8” cluster with the new and improved version of Hyper-V.


So while it`s currently running the SC 2012 workloads (which works pretty good, and I was able to deliver 4 hours of presentations/demos today, using this environment), I am looking forward to build the next generation of Hyper-V clusters next week with Windows Server “8”.


I have currently all my W8 workloads running on my lap top (yeah, Windows Server “8” directly on my lap top, forcing me to deal with powershell and other stuff that I wanna be able to manage), and I will use/test/play with the different migration options to move my workloads over to the Hyper-V 3.0 Cluster, with no downtime, using my WiFi.


I`ll post the examples and demos next week.
Posted by Kristian Nese at 6:40 PM No comments:

Windows Server "8" with Hyper-V and Powershell

I`m just about to get my hands on my SAN to be able to do some cool things covering both the SC 2012 suite (Private Cloud scenarios) and Windows Server “8” with Hyper-V.

I need access to both environments since I`ll deal a lot with both of them in different scenarios, like proof of concept, demos and researching. Sounds fun? – it is!


Below is a very simple overview of my environment, showing you that I have 2 clusters in a single domain. 1 Windows Server “8” Hyper-V cluster and 1 Windows Server 2008 R2 Sp1 Hyper-V Cluster with the current SC 2012 components installed and orchestrating the magic. 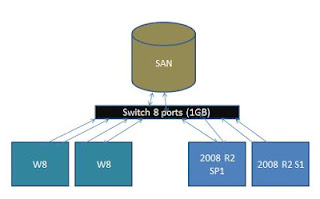 To run a SAN, I`ll use Windows Server “8” with the inbuilt iSCSI target, and i`m looking forward to test and play with Storage Pools and Storage Spaces.


So what have I done to this point, with no SAN for my VMs? People who know me also know that I`m addicted to clusters. I need them in my life. But the life has treated me good because I`ve been running Windows Server “8” directly on my laptop.


There are several reasons for this. Here`s a couple of them.


1.       Kristian, you better start learning Powershell. No discussion. Do it.


2.       Do all the possible research related to Hyper-V, and especially by using Powershell.


So, let`s talk a bit about Powershell in this blog post.


Several top dogs at Microsoft have stressed that it is extremely important for the technologist to be able to manage things through Powershell. And if you see this in the cloud context where as much as possible should be considered for automation, powershell is the key since the robust API towards SC 2012 and Windows Server “8” would be …. Powershell!


So here`s some handy Powershell cmdlets that I have been using the last days.


(Note, this is not rocket science but it`s very handy)


Start all your VMs


Shut down all your VMs


Enable Dyanmic Memory on every VM


(Thanks to Aidan Finn)

Clean up your environment after some heavy Storage Migration demos


(Thanks to Benjamin Armstrong)


And of course, there`s a lot of new cmdlets related to the Hyper-V Role.


To get an overview, type:


This will list all the cmdlets for you. You can also play around and use Powershell ISE tool to help you to build, test, and evaluate scripts that you create by using Powershell.


Oh, I have created some scripts as well, but I`ll save them for later in another blog post.


So my next step would be to move all my VMs with SC 2012 installed from my laptop over to the newly created lab. I will show the examples of how this was done in another blog post later.


Cheers,
Posted by Kristian Nese at 9:18 PM No comments: